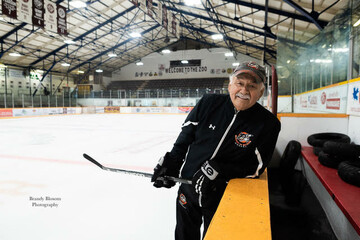 Northland School Division is pleased to invite you to a special presentation with former NHL player Reggie Leach on Thursday, May 5, 2022 from 6:30-7:30 p.m. via Zoom Webinar!

During this visit, Reggie will talk about perseverance, life as an Indigenous athlete/person and Truth and Reconciliation.

Reggie Leach is of Ojibwe ethnicity and is a member of the Berens River First Nations in Manitoba. Reggie grew up in Riverton, Manitoba which is where he earned his moniker the “Riverton Rifle”. Reggie played junior hockey in Flin Flon, Manitoba for the Bombers where he joined Bobby Clarke to form one of the most dangerous scoring duos in Western Canada Hockey League history.

Reggie was drafted third overall by the Boston Bruins in 1970. He played 14 seasons in the NHL and won a Stanley Cup with the Philadelphia Flyers in 1975. Some of Reggie’s accomplishments besides being a Stanley Cup champion include:

Reggie’s post-career has been just as impressive. With his son Jamie, Reggie runs the Shoot to Score Hockey Camp which travels to rural communities to work with children that might not otherwise get quality instruction. Reggie travels throughout North America and works as a motivational speaker. He talks primarily to Indigenous children about the lessons he learned along the way and the importance of being resilient.

Reggie wrote a book called The Riverton Rifle: My Story Straight Shooting on Hockey and on Life. Reggie and Jamie were recently the guests of honour for a Truth and Reconciliation event in Dryden, Ontario. The event included a whole day of activities plus a hockey game between the Dryden Ice Dogs and the Thunder Bay North Stars.